One of the greatest moments in my Maine trip was the finding of the grave of my original ancestor, James Wilson. It was almost accidental and a clear indication of how valuable tromping through cemeteries can be.

I was actually looking for one grave across the river in Brunswick. All of the first couple of generations of the Topsham Wilsons are buried in one of Topsham’s three largest cemeteries with one lone exception. Hannah, a one year old, died in 1763 and is buried in Brunswick’s First Parish Cemetery.

I thought that odd and First Parish was one of my planned destinations. I wanted to know why she was there. I enlisted the help of Barbara Demarais and was so glad I did. Barbara and I are cousins, surprise!  She has Purington ancestry which means our roots together go way way back. We were able to establish that in the first few minutes of our meeting. Funny how I’m related to most folks in the Topsham- Brunswick area!

She writes a blog about the cemeteries there in Brunswick and was happy to show me around. After we found Hannah’s grave in First Parish, she said, “hey, there’s another Wilson here – a James Wilson.” My retort, “What?” was gormless and my reaction once we found the maker was silent – mute astonishment and disbelief. When I came back the next day to look at the marker again, I found some little genie had cleaned it up and it was then legible.

One of the greatest things about the area was a project undertaken by a father – son team, John and Mark Cheetham, who documented the cemeteries in Topsham and Brunswick so the volume for First Parish had the inscription and placement recorded. We knew what it said but the growth on the marker obscured it. Cleaned up, it was evident.

What I didn’t know was where James lived. I now think that he lived only in Brunswick. After all, Topsham had a rockier start – getting wiped out by Indians at a couple of points. By 1735, there were 14 families living outside the fort in Topsham and another 35 in Brunswick and in 1739, Brunswick was incorporated as a town.

Edit: 6 Nov 2015 – James did live in Topsham prior to his death. His widow and all children were living there in 1746. I found ample evidence when sifting thru the Pejebscot  Papers at the Maine Historical Society. 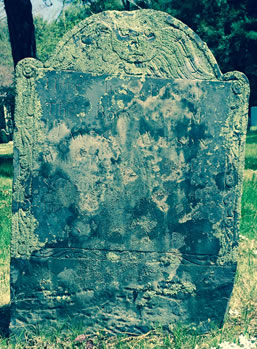 Only the location of one of his sons’ graves in Topsham is known today. I believe that at least one of them is also buried in First Parish – Samuel, the father of Hannah. There’s a fair amount of First Parish Cemetery without gravestones – many missing stones from those early years.

Visiting cemeteries, even if you have a photograph, is incredibly enlightening. Placement of graves, who else is buried near the one you are looking for, these are what you can’t see in a gravestone photo. Sometimes you can accidentally find the most important grave that you weren’t even looking for.

“Here lies the body of Mr James Wilson who departed this life September ye 9th 1743 in the 73d year of his age”.

And the Work Proceeds…

The Wilson Tree is Online Here!